In the 2022 IEEE Asia Pacific Conference on Circuits and Systems (IEEE APCCAS) held in Shenzhen from November 11 to 13, a paper co-authored by ShanghaiTech graduate students won the Best Paper Award. The paper is entitled “Hierarchical and Recursive Floorplanning Algorithm for NoC-Based Scalable Multi-Die FPGAs”, whose co-authors are second-year master student Luo Jianwen, fifth-year Ph.D. candidate Liu Xinzhe, and Dr. Chen Fupeng (a fresh Ph.D. graduate of the Class of 2022), all from SIST of ShanghaiTech University. 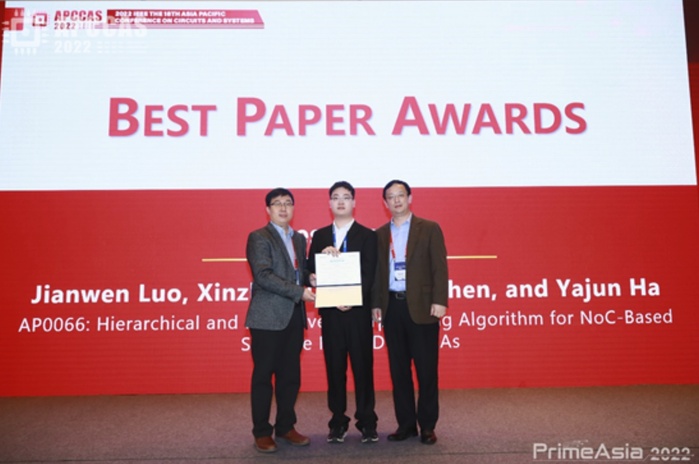 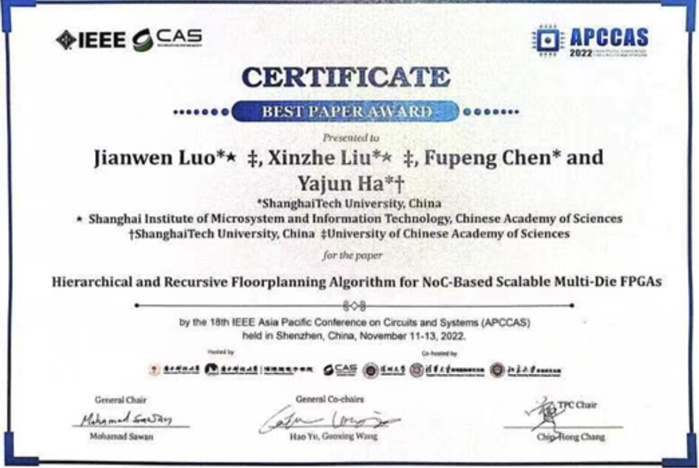 As the only awarded paper in the field of devices, electronic design automation, theory and others, it proposes a NoC (network-on-chip)-based hierarchically scalable multi-chip FPGA interconnection architecture with a hierarchical layout planning algorithm based on integer linear programming, which originated from Luo Jianwen’s undergraduate thesis project. “This research work has attracted great attention from academia and industry. The research team considered the factors of both architecture and algorithm, and proposed a novel and effective solution, which was highly recognized by the awards committee,” said SIST Professor Ha Yajun, the advisor of the three graduate students and the corresponding author of the paper.

As introduced by the first author Rao Chaolin, this paper proposes a precision configurable computing array for the applications of Neural Radiance Field to make the network precision adjustment available in scenes rendering with different complexity, thereby to improve the rendering efficiency.

IEEE APCCAS is the regional flagship conference of IEEE Circuits and Systems Society in Asia. The theme of APCCAS 2022 is Building a Fully-connected AIoT World”. From a total of 132 papers, 10 were nominated for Best Paper Award and 3 were awarded for the Best Paper Award.