The quantum anomalous Hall (QAH) effect, an important research direction in the field of condensed matter physics, is generated by the spontaneous magnetization of the material itself without relying on a strong magnetic field. When a perpendicular magnetic moment is introduced into the host topological insulators, the broken time-reversal symmetry lifts the spin degeneracy and gives rise to the formation of the QAH state. The QAH effect shows good promise for applications. The quantum Hall state can be achieved in a zero magnetic field, which means that the requirements needed to achieve the quantum Hall state are greatly reduced. Furthermore, by using the dissipation-free edge state of topological insulators, a new generation of low-energy transistors and electronic devices can be developed to solve the bottleneck problem of Moore's law.

Since the spin polarized edge state is characterized by macroscopic dissipation-free transport, it provides a novel approach towards development of low-power electronic/spintronic devices. In addition, the combination of superconductor and QAH state also enlarges the opportunities for physical implementation of topological quantum computing. Therefore, designation and fabrication of high-quality samples to realize multi-field controllable QAH effect have become hot topics in condensed matter physics and spintronics in recent years.

In the experiment, the research group firstly optimized the element ratio of Cr doped (Bi,Sb)2Te3 thin film, tuned the Fermi level into a surface state gap and determined the thickness by in-situ reflective high energy electron diffraction. Through magnetic and electrical transport measurements, it was found that thick 3D MTI samples show QAH effect at zero magnetic field, while a large external magnetic field is required for thin MTI samples to reach the quantized Hall plateau resulting from a trivial band gap induced by hybridization of surface states. Furthermore, we found a thickness dependent topological phase transition of the QAH state by analyzing renormalization group (RG) curves of samples under different magnetic fields and temperatures. Based on the preceding experiments, first-principles calculations were conducted to unveil the magnetic mechanism of MTI systems and regulation of Van Vleck spin polarization by topological surface states. These results not only show the metal-to-insulator phase transition based on the QAH effect, but also lay the groundwork for research on novel physics in the MTI system. 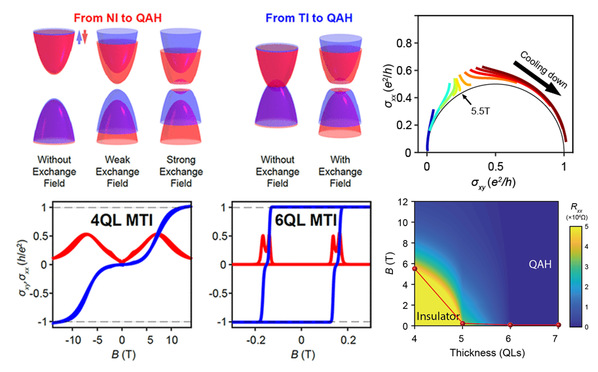