Magnetic topological insulators (MTIs), which integrate both topology and magnetism within one system, have greatly broadened the research scope of quantum materials and spintronics. In contrast to the traditional magnetic atom doping method, MTI heterostructures, which can be realized by the combination of a topological insulator and a high-temperature magnetic material, have unique advantages. In such MTIs, the overall magnetic properties can be effectively enhanced through the magnetic proximity effect. Furthermore, the separation of spin orbit coupling effect and magnetic exchange coupling in different layers enables us to optimize each contribution independently. Therefore, building a reasonably system of magnetic heterostructure based on topological insulators will greatly promote the application prospects of topological quantum materials in spintronics. To address the above scientific issue, recently, Prof. Kou Xufeng’s group from School of Information Science and Technology (SIST) and Prof. Zhang Shilei’s group from School of Physical Science and Technology (SPST) in ShanghaiTech Laboratory for Topological Physics have designed and fabricated the epitaxial (BixSb1-x)2Te3/MnTe magnetic heterostructures by molecular beam epitaxy (MBE) and realized effective manipulation of anomalous Hall effect in this system through precise variation of layer thickness and doping level. These findings, titled “Tailoring the Hybrid Anomalous Hall Response in Engineered Magnetic Topological Insulator Heterostructures”, have been published international academic journal Nano Letters.

Experimentally, Kou Xufeng’s group have grown high-quality Bi2Te3/MnTe heterostructure thin films epitaxially on the GaAs substrate with the introduction of a two-dimensional material CrSe buffer layer. Through the magneto-transport measurements, they have observed hybrid anomalous Hall effect (AHE) in the system. Subsequently, quantitative characterizations have revealed that the hybrid anomalous Hall response can be decomposed into the MnTe and Bi2Te3 contributions while the AHE amplitude increases as the thickness of the top layer Bi2Te3 increases, indicating the formation of intrinsic ferromagnetic order due to the interface proximity effect. More importantly, by doping the Bi2Te3 layer with Sb, they are able to tune the carrier density and type in the system subtly and thus manipulate the sign of the Berry phase-associated AHE component. These results not only deepen the understanding of the intrinsic physical mechanism of the anomalous Hall effect, but also demonstrate the tremendous advantages of magnetic topological insulator heterostructures inefficiently the tunability of topological and magnetic order. This in turn unveils a new avenue for MTI heterostructure-based multifunctional applications, such as magnetic storage and magnetic sensors. 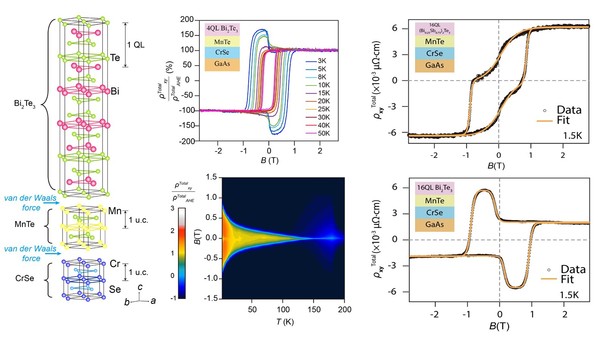