A team of two graduate students (Zhang Yizheng and Zhu Jiahui) and four undergrad students (Zhou Yang, Li Yike, Huang Jingyi and Nian Zhonglin) from the School of Information Science and Technology participated at the IEEE DJI’s Robomaster Artificial Intelligence Challenge, held from May 20th until May 22nd. This team, led by Prof. Andre Rosendo, qualified in first place at the group stage and proceeded to the quarter finals, winning a “top 8 award” (called 2nd Prize) of 2000 dollars. The competition had a total of 68 teams registered. 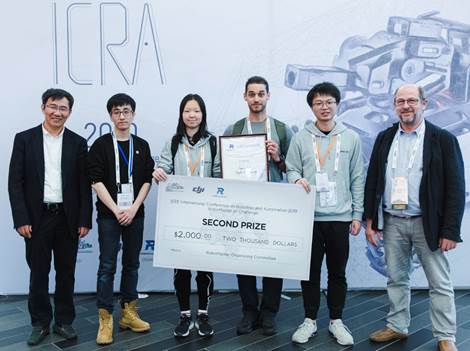 This challenge aims to combine different aspects from Computer Science to create a fully autonomous team of robots. Each university is represented by two robots, and universities compete against each other in short 3 minute matches where their fully autonomous robots need to cooperate and win against the opposing university’s two robots.

Unlike the traditional Robomaster competition, which is seen as a Mechanical Engineering competition, the AI Challenge requires a different set of skills from its competitors: DJI sells a standard robot platform to be used by the teams, and the students need to work to provide computer vision to autonomously recognize the enemy robots, LiDAR sensors to self-localize and map (SLAM) the environment, and a decision-making algorithm, such as Reinforcement Learning, to guide the actions of the robots according to the states of the enemy in the map. 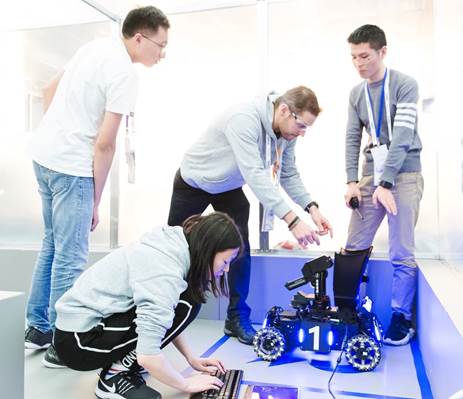 ShanghaiTech’s team adopted an Adaptive Monte Carlo Localization (AMCL) approach for the self-localizing problem, while combining a local planner (Time Elastic Band) and a global planner (A*) to move the robot to specific positions at the arena. For our computer vision strategy, we trained a Convolutional Neural Network with 240 images of the enemy robot, and used a lightweight implementation called YOLOv3, capable of running at high speed (more than 30 FPS) at a fast GPU-based microcontroller, called Nvidia TX2. Finally, from a decision-making perspective we created a Reinforcement Learning strategy by using a data-efficient Policy Search Algorithm which uses Bayesian Deep Learning to find optimal policies with very few trials. This strategy was also the reason why the team was named BayesianBot. Among students in the team, Zhang Yizheng, Zhu Jiahui, Huang Jingyi and Nian Zhonglin are members of the LIMA Lab, where Bayesian Learning applied to Reinforcement Learning (very famous research topic after the success of AlphaGo) is the main research topic. Zhou Yang and Li Yike both attended the 2018 RISS summer research program held by the Robotics Institute of Carnegie Mellon University and got great benifits.

Before the competition started the teams had to write a report to qualify for the competition, and the team BayesianBot received an A in their report, qualifying in the 9th position. At the competition the team was placed in a group of 3 universities, qualifying in 1st place at the group and proceeding to the Quarter-finals. There, the team faced Zhejiang University and lost in a nail-biting match where Zhejiang won for 3 shots. Later, Zhejiang proceeded all the way to the final match, where it lost to Beijing Institute of Technology.

This is the second year that ShanghaiTech participated at this kind of competition and the result is very positive. It boasts the true strengths of SIST, and in special from students from the Living Machines Lab, which aims to combine Artificial Intelligence to Robotics.